skip to main | skip to sidebar

Across 5 state lines, I braved the LONG late night drive from Phoenix back home to Arkansas. It was a small price to pay for a buying spree at Trader Joe's, thus the genesis of Operation Bootleg. I left my project around noon, stopped by TJ's to pick up the goods (six cases of cheap wine), then headed north toward Flagstaff. The anticipation of our annual Non-Birthday Party was all the

incentive I needed to head off a sojourn midway-ish in

Amarillo for the night at around 1am. Something told me I would never make it up before dawn (my original plan) if I stopped to rack, for I am anything but a morning person. So while filling up at a Love's Country Store near the Big Texan 96oz. steak, I chose to press on. Not the smartest of moves, but it really was not nearly as bad as I expected. At some point, I had planned to get so tired I would have no choice but to pull over and sleep for a few hours. That point never sharpened and before I

knew it, I was entering the Turner Turnpike and flying by the Clam Shrine (a story for another post!). I rolled into the Tulsa airport parking lot to retrieve my trusty 4runner at around 6am, the sun was coming up and traffic was swelling to a pre-rush hour mass. I pulled out of the airport and giddily embarked on the final 2 hours of my 19 hour journey, even finding time to stop by Sam's in Bentonville to pick up fresh flowers for my homegirl. 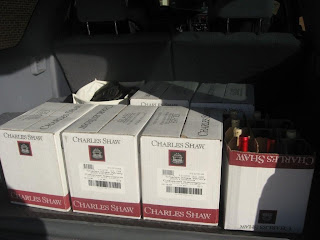 Seeing as how it was the party weekend, and Operation Bootleg commenced for that purpose, I had no choice. Hey, we all have priorities, right?! Cheap wine and the forceful beckoning of a Non-Birthday Party are all it takes for me to be motivated to drive through the night. Besides, the scenery from AZ to AR is, well, less than exciting...had I driven during the daylight I would have put myself to sleep counting cows and racing BNSF freight trains before crossing the TX line! No worries, I was in control, and kept telling myself I was stopping at the next town if the need arose...but it never did. I passed out cold a few short minutes after pulling into the driveway...but had some sweet dreams! Well 10-4 good buddy, keep your eye on them smokies for me...we're loaded up and truckin!
Posted by Eli at 1:21:00 AM

The Grown Up Goonie:

Eli
I have been accused of having been beaten by the tangent man, so this is the perfect forum for my warped sense of humor. I warn you, some content could be boring, or depressing, or funny, or odd ...nonetheless it is all mine...enjoy my free therapy.